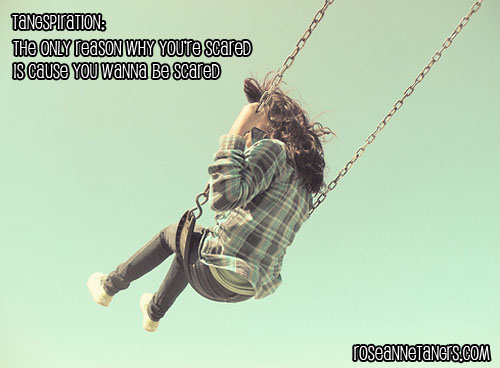 The only reason why we’re scared, is cause we wanna be scared. It’s really our choice. Fear comes in many different forms. It can be as simple as that pounding feeling you feel when you’re about to climb up on stage and say something, could even be as complex as getting started on a dream online store. Trust me, we could be so scared that we’re peein’ in our pants but I want you to know that the only reason why you’re scared is because you’ve chosen to be scared.
Listen to the voice that’s telling you that that audience out there is going to love what you have to say instead of the one saying you’re going to trip on the stairs getting up there, split open your pants and everyone’s going to start laughing at you before you even start (c’mon as if that’s going to happen). Or the voice that’s telling you that you’re going to make it, not fail it. We all have two voices in our head and it’s up to us who we listen to.
I guess it comes from a little experience though. Being a blogger, I get a little scared about whether you’re going to like watching a new video I made or even reading what you’re reading right now. Maybe I got a little chubbier and you’re going to notice, maybe what I’m writing now doesn’t even make sense. What if you get sick of me one day? Or listen to some gossip that’s so not true about me on the internet. I don’t know, you never know what could happen really! But truth be told, I guess doing what I do gets hard. I’m sure if you’ve started a blog before or you’re having one now, it’s not always a comfy bed of roses. There’s a lot of hard work that goes into this and I just tell myself that I choose not to listen to that voice that’s telling me I’m no good to anyone and listen to the one that maybe even if I can’t reach millions of people, that maybe just one person might get where I’m going and might overall benefit from what I’m doing. Even if it’s just one person, it’s enough for me. There were a lot of times I just wanted to quit but I’ve told myself countlessly that “No, I’m not going to listen to that voice, I’m going to believe in me,” and it actually keeps me going. Plus, y’all are amazing people who are really supportive.
I’ve figured that it’s also pretty related to love, especially I guess mending a broken heart. I think when we break up with someone, we keep thinking of all the things that we could have done right, or just really replaying memories that we have of them and just being miserable about it. I don’t think it’s God’s intention to make you miserable because He wants you to live your life to the full and that’s not part of the plan. I’ve made a video on How to Get Over Someone which is getting a good amount of attention, it really makes me happy to look at the comments on that and see how many people are really getting help from my video but one of the things I did say is to ignore it and don’t feed the fire. I related the fire to be basically the love you have for that person who you can’t be with anymore and people tend to really over-think and overwhelm themselves that they feed that “love” that’s not supposed to be there anymore. They tend to add “wood” which are the thoughts to the “fire” when they should be ignoring it so that it can die out eventually. We need to allow ourselves to do that, but if we listen to that voice that makes us miserable, there is no way we can let that naturally happen. When I made that video, I was in the process of “healing” actually and it took me a long time but I decided that I had enough of these stupid thoughts, of these memories being dangled in front of me, of me feeling insecure and not good enough – I guess you could say I was sick of depending my happiness on a person who didn’t deserve it. I was sick of it enough to tell it that “No, I’m not going to listen to you anymore, I’m actually great, I don’t need that kind of person in my life, and there is so much ahead of me that the now will not define my future.” It worked.
I think also sometimes we tend to underestimate ourselves too much. Maybe we are whipped from young to think that we can’t do everything and anything. We should be modest and not think of ourselves so highly (of course not stepping over the line of egotistical) but I guess it’s okay to feel like you’re empowered and you’re awesome. Because you’re awesome. Everyone has this purpose in life, even if you don’t know it yet, it might not be to start up your own bakery or magazine – sometimes purpose comes through not by financial or career perspectives, but by relationships with people. Maybe your calling is to help others, help your family, help friends, help your partner grow. I’m sidetracking. Point is, value yourself because you are valuable and because you are valuable, listen to the right voice inside your head – the one you know is right.