Happy Halloween! I still remember when Halloween was worth more than a club night out and sluttified dresses. Back in the day, living in the American community in Singapore meant trick or treatin with pillowcases, going to friends houses, eating candy corn and bobbing for Apples in the good ole’ American tradition. Of course the logic of a twenty year old asking for candy among a swarm of five year olds might seem a little extraordinary, but who says we can’t celebrate Halloween with a bit of costume fun. In early October, I met up with 5 other lovely YouTube Beauty Gurus in Melbourne – MissPixieLuLu, ProjectChester, Karlacosmetica, AddictiontoShopping and Aleesang – to do an Alice in Wonderland Halloween Makeup Tutorial Collaboration. We decided to go all out with the costumes, the video plan, the editing and the transitioning of the whole video to video, and channel to channel concept. In fact, here’s the finished product. It starts with the lovely MissPixieLuLu and the introduction and weaves into the next tutorial and then the next!

I was the Queen of Hearts or the Red Queen, so you can view my part right here!

We met up at Lucy’s house, which is beautiful by the way, and we decided to bring our costumes and make-up, set the table as if the Alice in Wonderland cast was coming to town and film the introduction and beggining and ending parts of each tutorial. It was a lot of work, and it took more time than what we thought we were going to take even taking the first few scenes. No wonder actors get paid so much! As we got a hang of where the camera should go, the lines and the lighting, we soon got used to filming the whole thing. Many cupcakes later, we finished and it was well worth it. It turned out fabulous, don’t you think?

I decided to do this making blog post sort of like a photo blog – more photos, less words – so let’s see a few behind the scenes photos shall we?

Here’s the lovely Lucy (MissPixieLuLu) and Karla (karlacosmetica) applying their make-up! Lucy is the Cheshire Cat and Karla is the White Queen! Looking silly into the camera! MissPixieLuLu shading her face purple just like the Cheshire Cat! 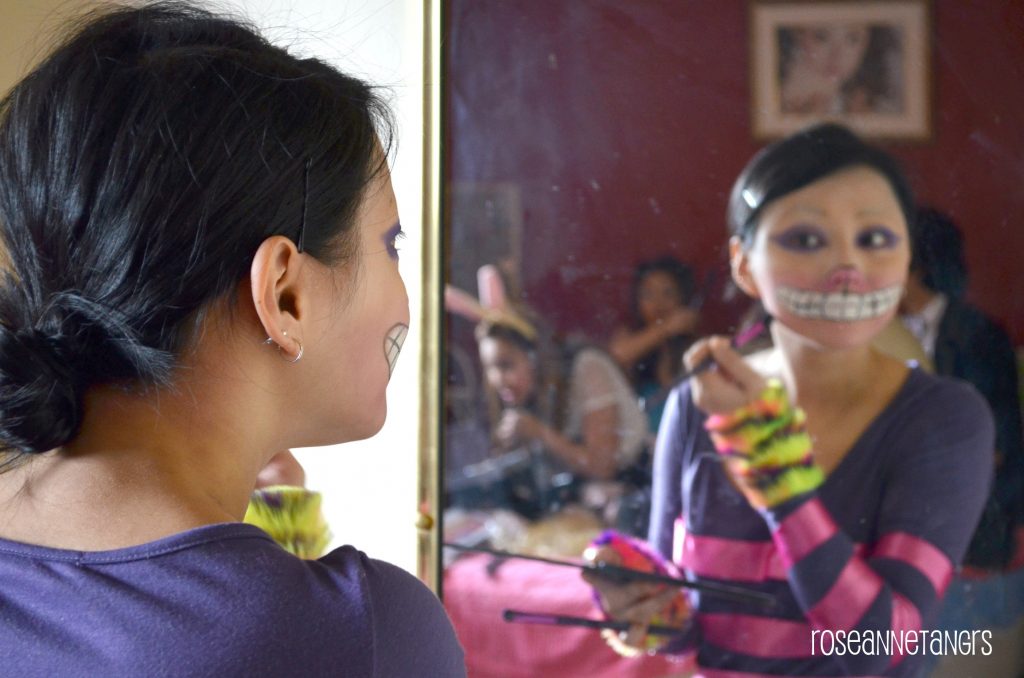 Everyone lazing around, putting make-up on or doing their hair – Daniel, Gaetano, Alice and Alee 🙂 I thought the Mad Hatter’s Hat was really cool! The Alice and The White Queen being buddies as usual! Alice (Angela from AddictiontoShopping ) doing a few touch-ups before filming! 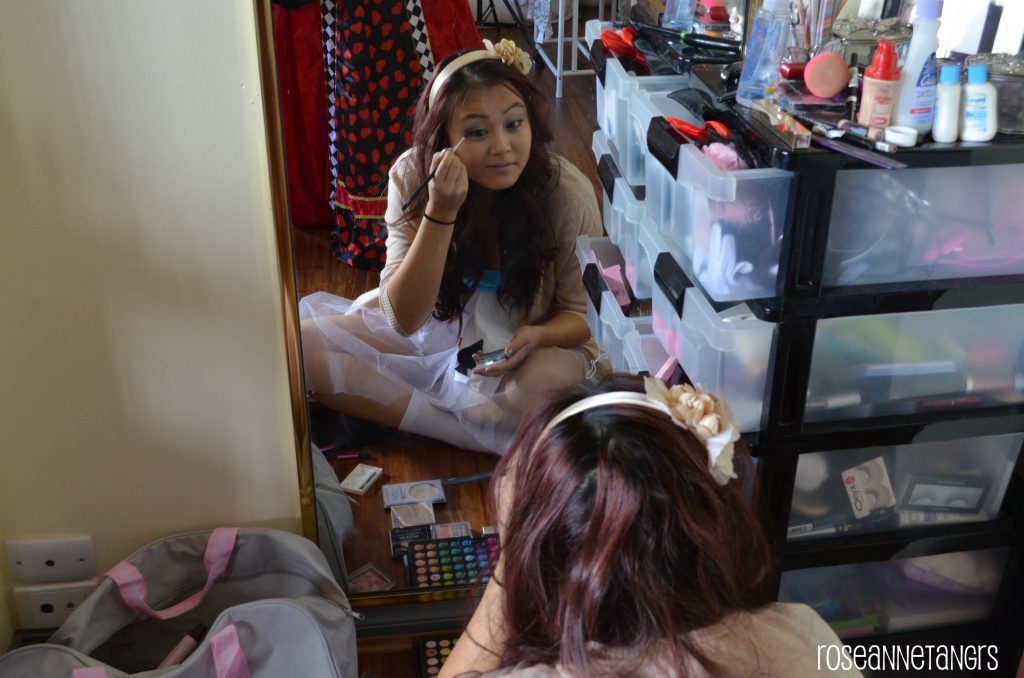 The White Rabbit, White Queen and Queen of Hearts! 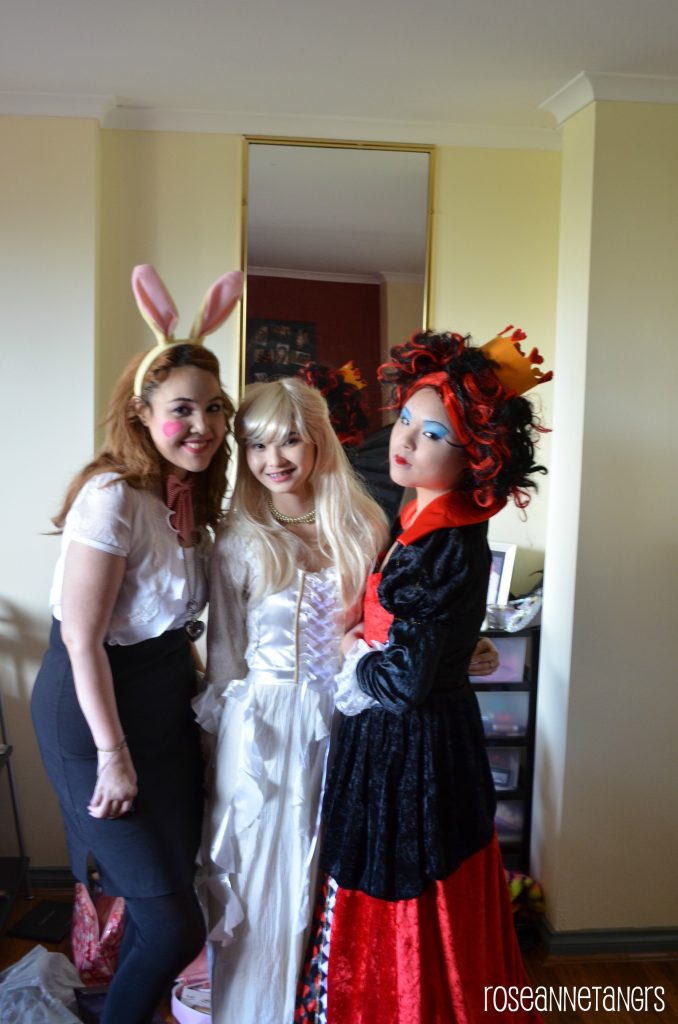 I’m actually not sure what they were looking at! I’m pretty sure it’s a foundation? My costume was from SAVERS – a opt/thirft shop! It’s supposed to be a Vampire Queen of Hearts costume but I thought it would do. Plus, it’s brand new. If anyone wants to buy it from me (it fits a size 10 to 12) let me know! It’s defo up for grabs! It’s time to set the scene! Look at these yummy “eat me” cookies! The lovely Daniel and Gaetano from ProjectChester and previously allaboutdaniel ! 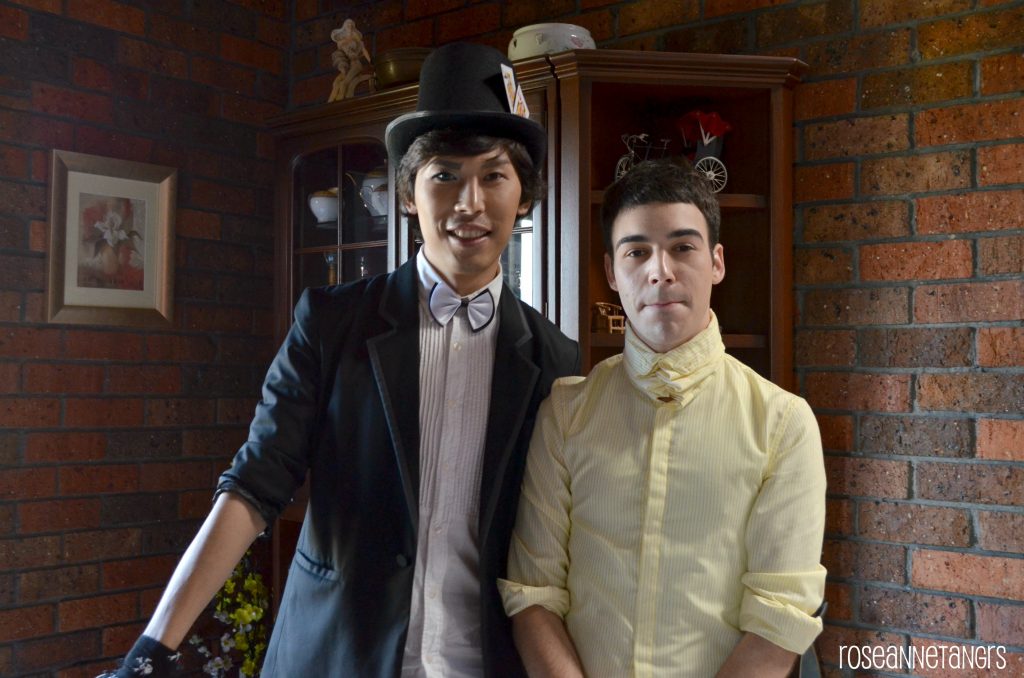 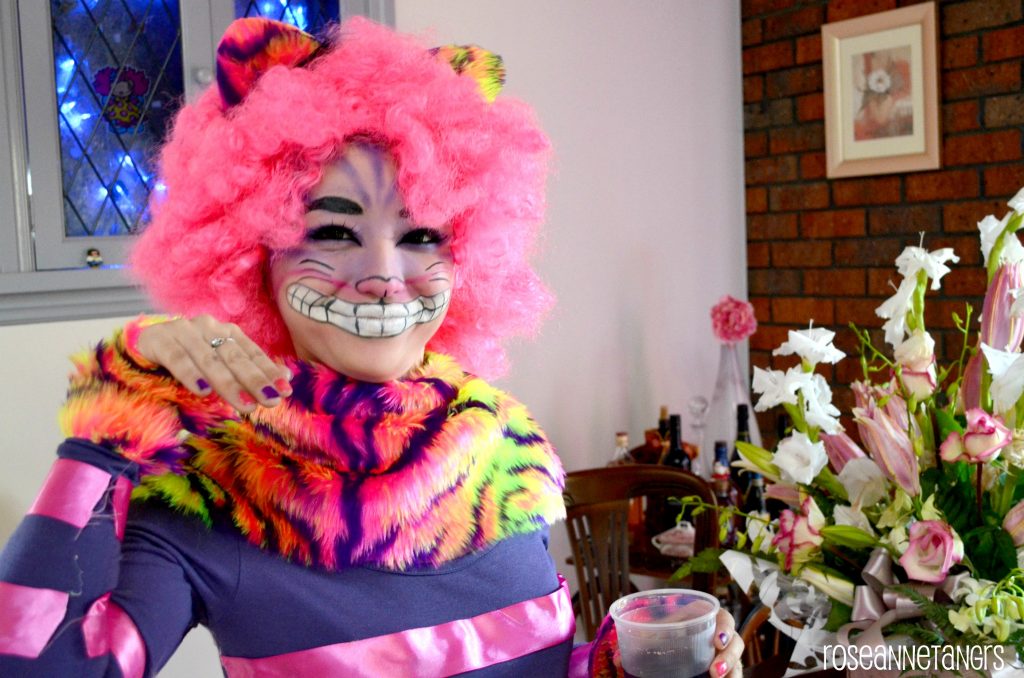 We were eating all the yummy treats on the table throughout the whole shoot! 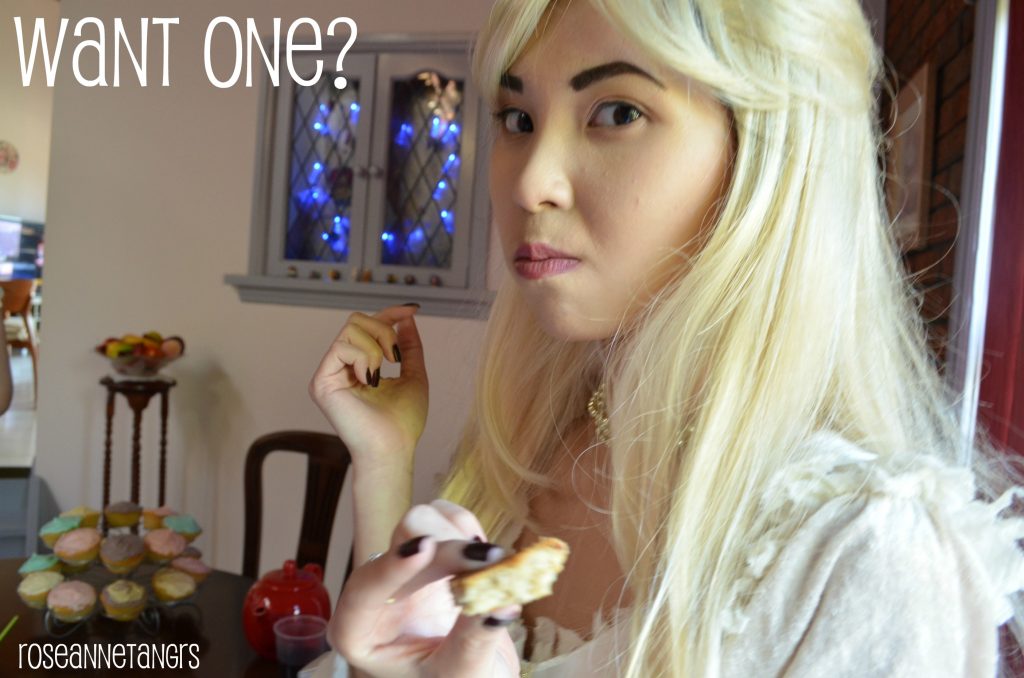 Unwrapping cupcakes to set on the table! 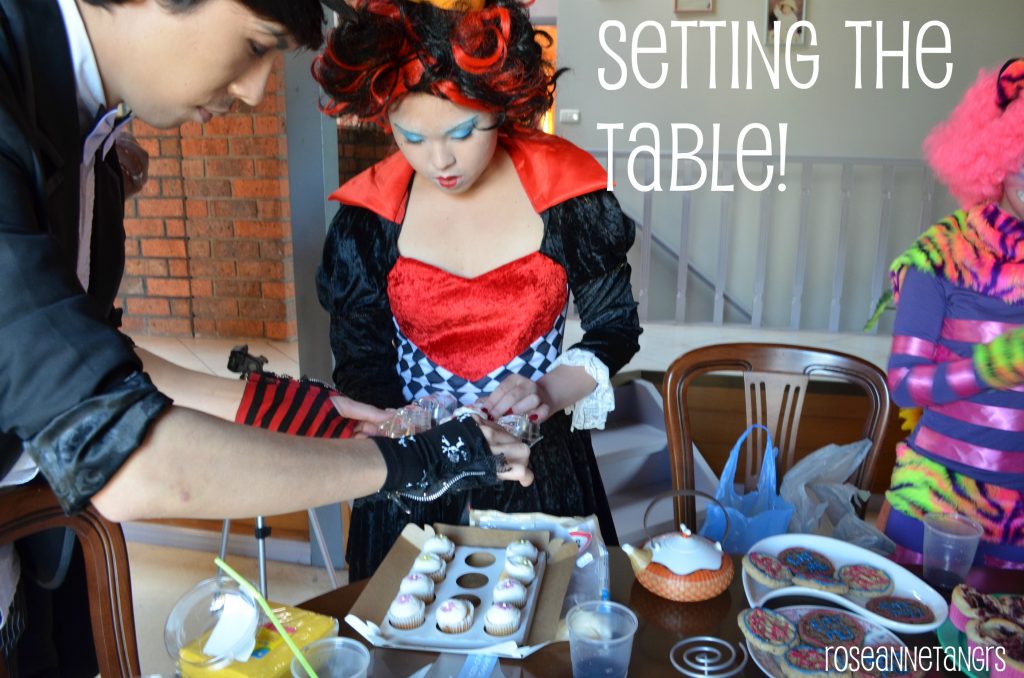 Because the table at the tea party in Alice in Wonderland was pretty messy, we were sure to add tipped over tea pots and half-bitten cookies! 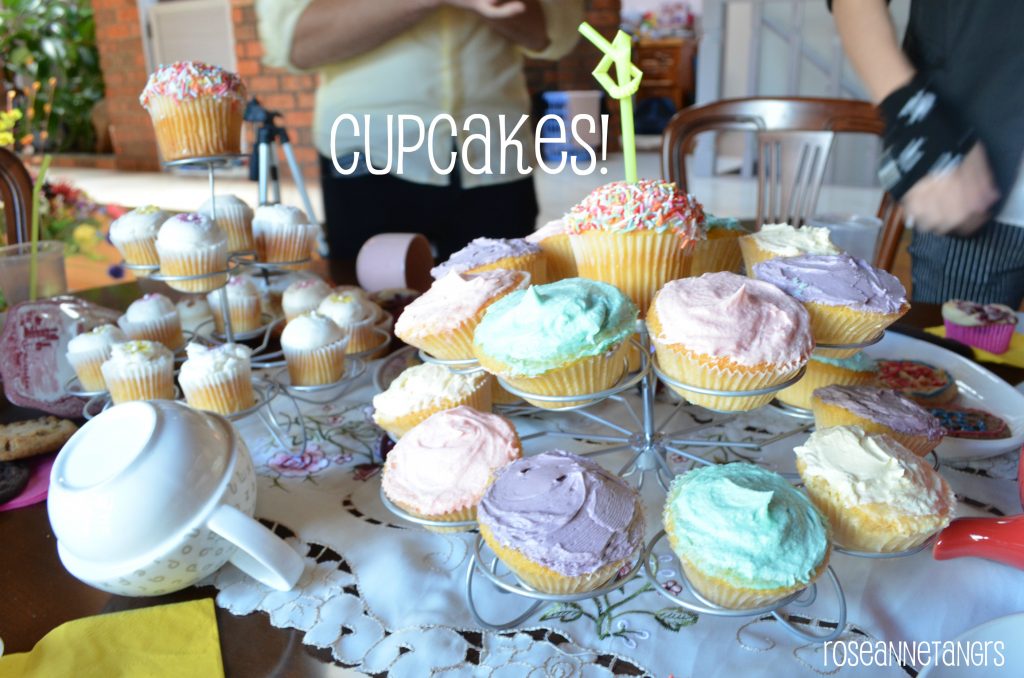 Still positioning everything!  I think setting the table was one of my favourite parts! 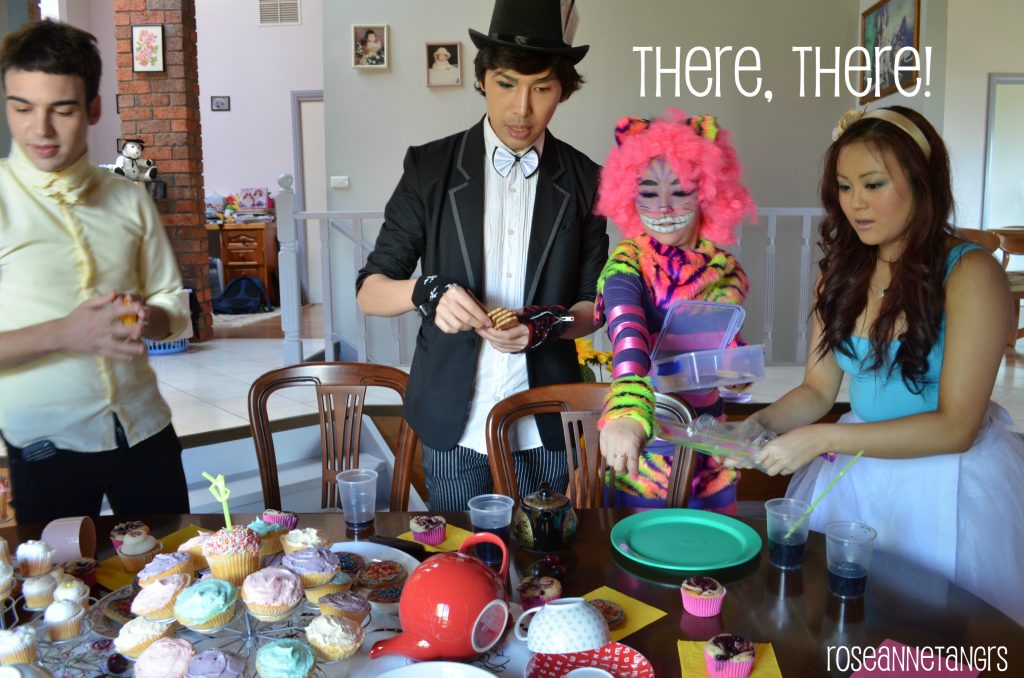 Now for the cast… 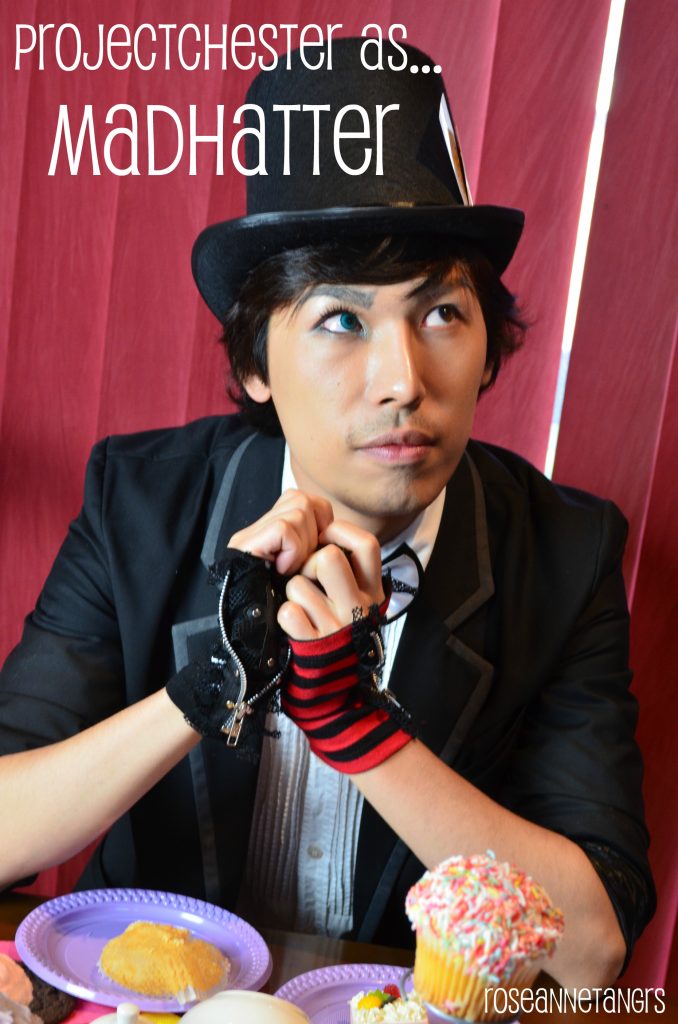 and a little hair-off picture! That wig was super annoying! 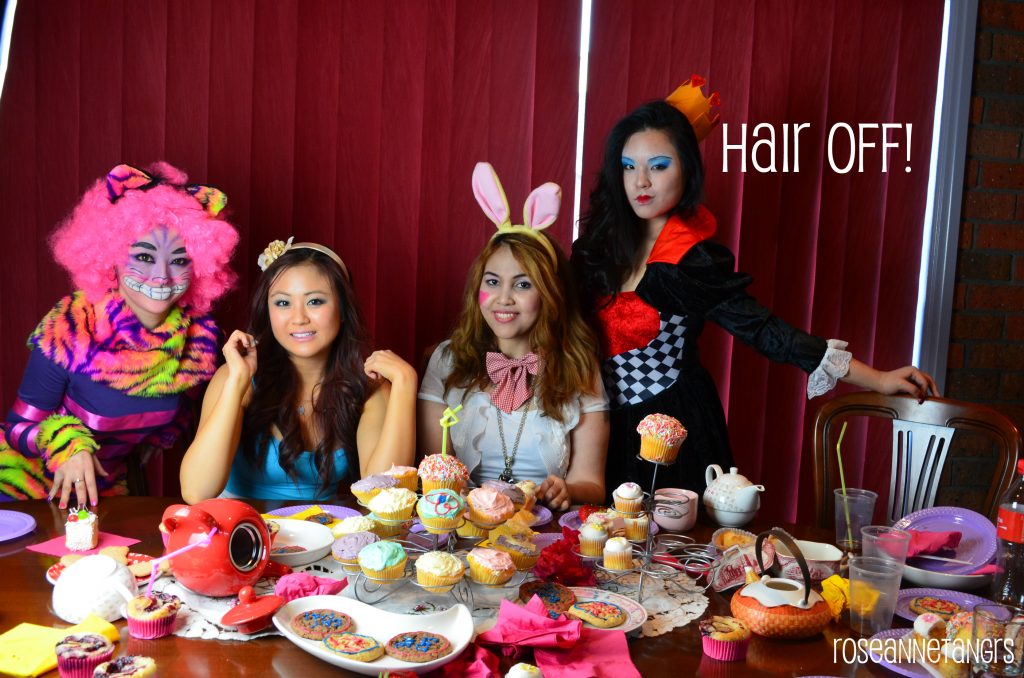 We then ended the day with yummy Fish and Chips from the best Fish and Chippery in Melbourne! What a reward for all our hard work that day! P.S: If you’d like to win the Urban Decay Naked Palette, don’t forget to subscribe on the upper right! Just enter your email and subscribe before Nov. 25, 2011 and you might just be the lucky winner, good luck!